44 Polish cities, in cooperation with the Ministry of the Environment, participate in the project aimed at adapting them to the observed and prognosed climate changes.

The 9th Petersberg Climate Dialogue concluded with a clear commitment to the ambitious and socially-compatible implementation of the Paris Agreement. Representatives of 35 countries formulated a clear expectation that the implementing rules for the Paris Agreement will be adopted at the UN Climate Change Conference in Katowice at the end of this year. They also made it clear that they intend to make the upcoming changes socially fair with a view to achieving a just transition. 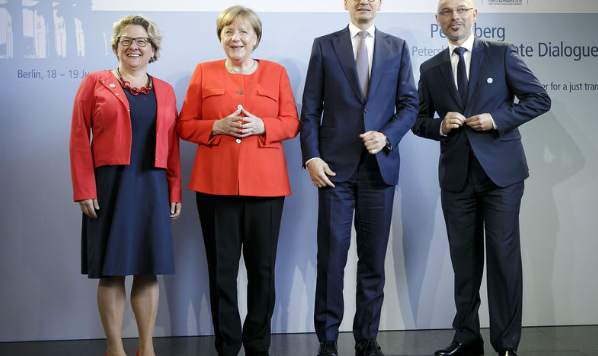 Federal Environment Minister Svenja Schulze commented: “Climate action and equity go hand in hand. This is the important message being sent from this Petersberg Climate Dialogue. When it comes to climate action, many economies are facing the task of realising enormous structural changes. International experience has shown that the earlier such adjustments are made, the easier it is to avoid disruptions and maintain social cohesion. In all this, we must keep in mind that climate change, in particular, poses by far the largest threat to social cohesion in many regions. This Petersberg Climate Dialogue has opened up an international debate on socially just climate action – a debate in which we can learn a lot from one another.”

Polish Minister for the Environment Henryk Kowalczyk underlined that the adoption of the complete package implementing the Paris Agreement at the Katowice COP would be a very important proof of collective ambition to do more and faster together. The presidency, guided by the Parties, will make sure that the outcome of the conference takes all the nations into peaceful, sustainable future.

Designated president of the 24th UN Climate Change Conference in Katowice, State Secretary Michal Kurtyka stated: “We need to keep people in the heart of our policies. This means that our climate policy must ensure benefits for the society and just transition for all our citizens. In order to reach climate neutrality we need both groundbreaking mitigation technologies and enhanced sequestration potential by biosystems. Making use of technologies which are just ripe enough can – with a little kick – help us achieve our long-term objectives, such as renewables, electromobility and digitalisation.”

Germany and Poland organised the 9th Petersberg Climate Dialogue as co-hosts under the heading “Changing together for a just transition”. The concept of a just transition for example the socially compatible transition toward a more climate-friendly economy, was therefore a prominent feature for the first time on the international agenda of climate diplomacy. Many examples of structural change, possibilities for retraining employees and new climate jobs were discussed. Topics of the conference also included commissions for structural development and climate action, and dialogue formats with social partners.

Talks also centred on preparations for the UN Climate Change Conference in Katowice this December where it is expected that a robust set of rules for implementing the Paris Agreement will be adopted. The political phase of the Talanoa Dialogue will also take place during the conference in Katowice informing the preparation of NDCs. Current NDCs are not sufficient to limit global warming to well below two degrees, or let alone below 1.5 degrees.

Do you have an idea for action? Do you know what could improve your city's resilience?

Check out the entire calendar